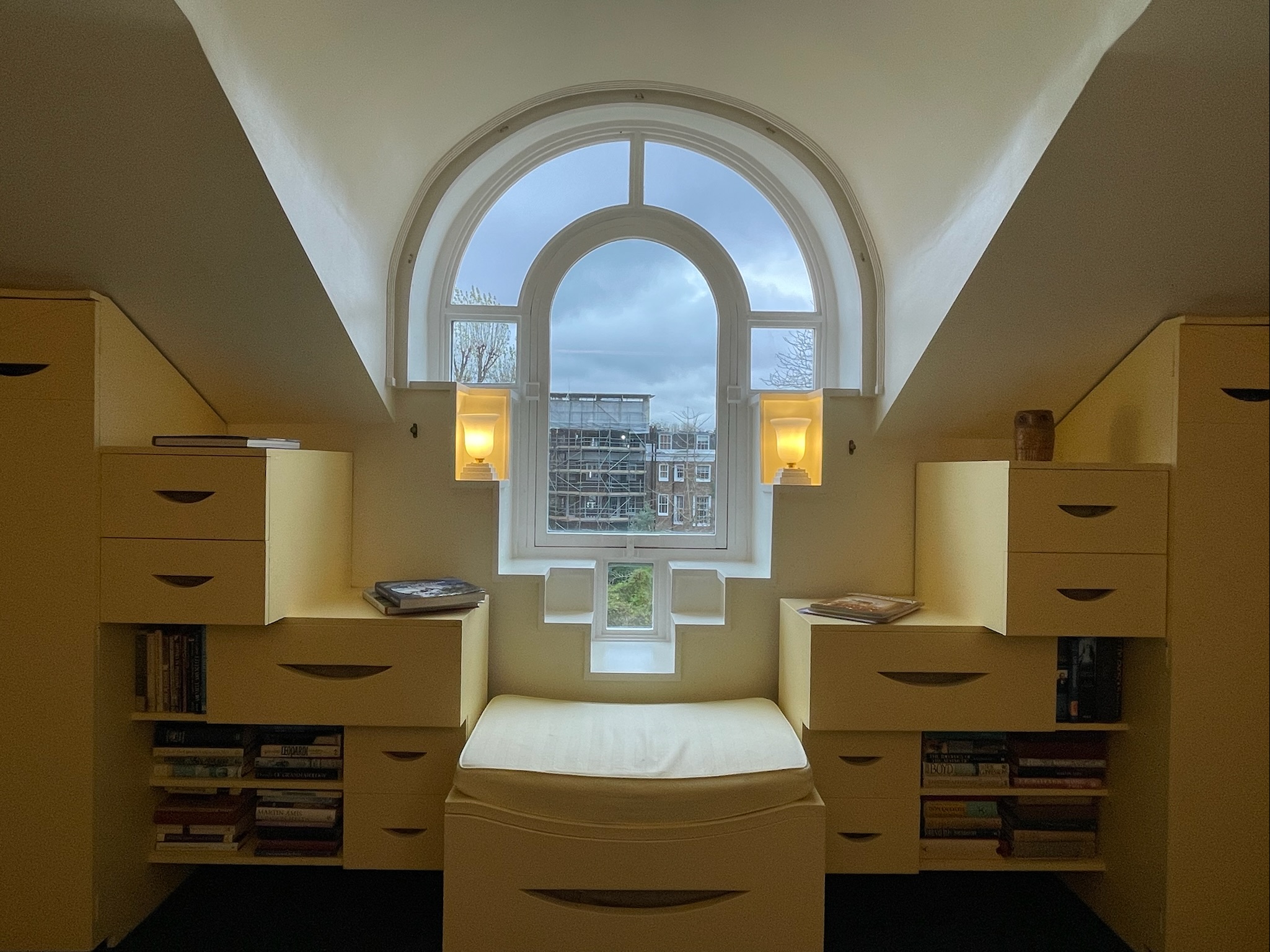 The Cosmic House: A Post-Modern Fantasy

As an architecture student in the early 1980s, it was impossible not to be influenced by the writings of Charles Jencks. His seminal book, The Language of Post-Modern Architecture defined post-modernism in theory. This movement was a reaction to the rules of modernism, and one that embraced classicism, pop, art, ornament and symbolism.

Jencks's own house, The Cosmic House, was his labour of love, a manifestation of his theories designed in collaboration with architect Terry Farrell. It was the first Grade-I listed post-war house in the UK and it is now open to the public.

In London's exclusive Holland Park, 19 Landsdowne Walk was an end of terrace house, built in the 1840s in a characteristically London language of stock brick, white stucco and mouldings. Unafraid to reference the past, Jencks extended the house by replacing the garage with a three-storey structure with an ogee roof.

Internally, the house is filled with drama and kitsch. All floor plans are centred on a stone spiral stair, the solar stair, linking all levels. It is said to be inspired by Inigo Jones's incredible cantilevered stone stair in the seventeenth-century Queen's House in Greenwich. Every room is filled with Jencks's idiosyncratic furniture and every surface is painted in a palette of glossy pastels.

On the main (ground) floor, the rooms are themed on the seasons of the year. The Spring room is focused on a exuberant fireplace. The original design, a stark black and grey Neo-constructivist fireplace was commissioned from Dutch architect, Rem Koolhaas but rejected for not being symbolic enough. Instead, the selected design is a ghastly concoction by Michael Graves.

Farrell, Koolhaas, Graves...these are just some of the young architects that Jencks promoted at an early stage of their careers who went on the define the urban design and architecture of cities around the world. These links add to the fascinating narrative of this house.

One of my favourite rooms is the library. A city within a house within a city, this microcosmic interior skyline is among the house's most remarkable rooms. It is defined by its bookcases, each of which is given a distinctive profile referring to the books it contains. The shelves designated for Ancient Egyptian books have a pyramidal form, Ancient Roman a domed form, Medieval stepped gables, Late Modern simple geometries and post-modern pick'n'mix of PoMo crowns.

The Cosmic House may be seen as the antithesis of current good taste. Yet for all its stage-set ambience and unfashionable fit-out, it was highly influential on a generation of leading architects and designers. A visit is highly recommended, booking is essential.

Join Seeing Architecture for walks around London to learn more about why and how buildings like The Cosmic House are created.