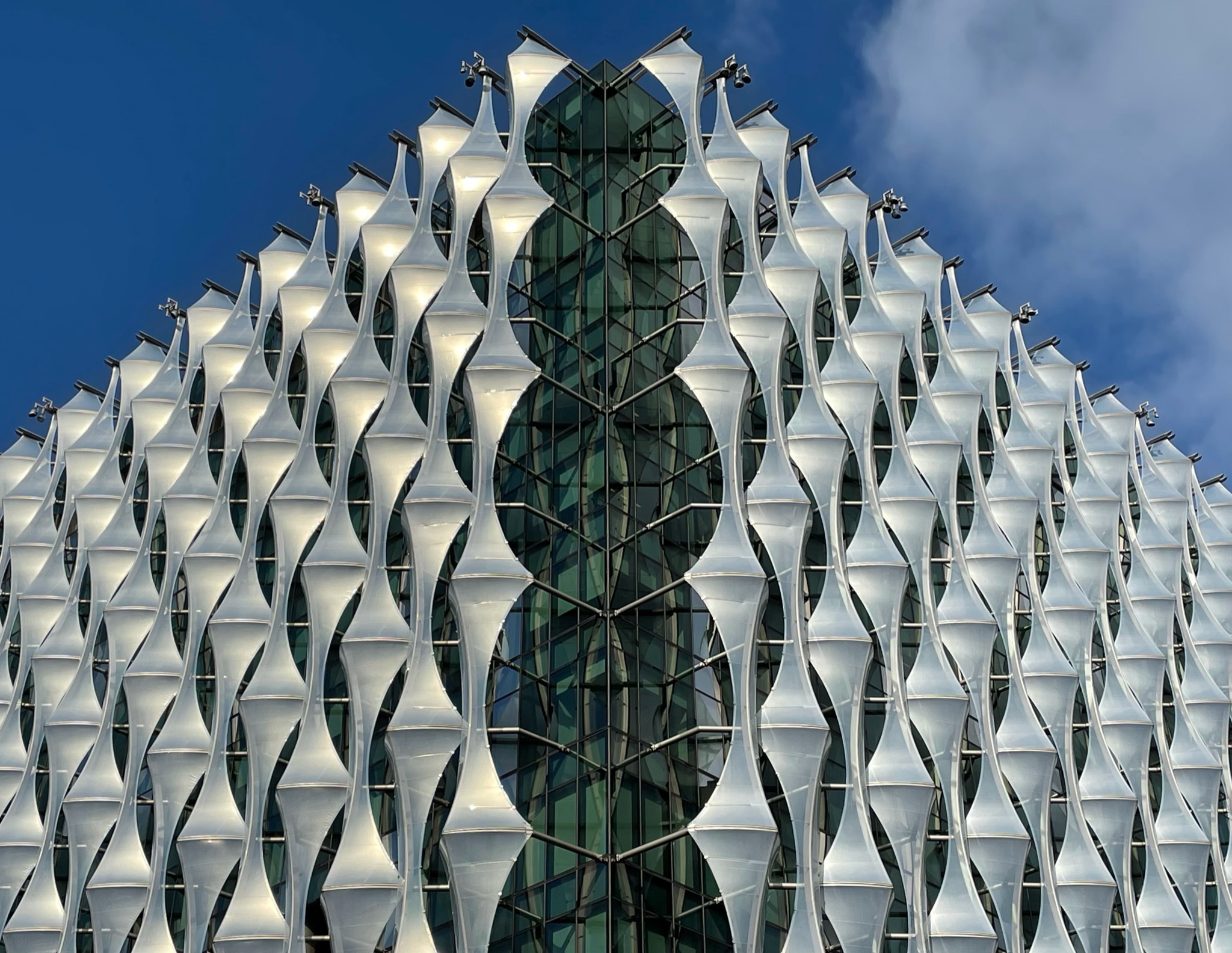 Sandwiched between the River Thames and the elevated rail tracks leading into Vauxhall Station is Europe's largest urban redevelopment area. Its name is a bit of a mouthful - Vauxhall, Nine Elms, Battersea (VNEB) Opportunity Area. Extending to 340 hectares, this high-density neighbourhood currently boasts 5,000 new homes with a further 15,000 in the pipeline.

A couple of weeks ago, the new Northern Line extension opened, serving Nine Elms and Battersea Power Station (or is that Battersea Power Station Station?); finally this area is readily accessible. Last weekend was a perfect time for Seeing Architecture to take a leisurely walk through the area and see some of the completed and completing projects.

Starting from Vauxhall Station we traced a path along the riverside and parallel to it.

Initially the scale is daunting. KPF Architect's Damac Tower is a superblock that looks as imposing as a Soviet constructivist model. It's a powerful form but it's hard to imagine living there, especially as the river views are soon to be blocked by the 50 and 42-storey towers by Zaha Hadid Architects on the adjacent island, or rather, traffic island, site. Moreover, Chinese developer R&F Properties is developing Thames City, encompassing a mind-boggling 12 towers nearby with better river views.

At the corner of Nine Elms Lane stands One St George Wharf. Towering at 50 storeys, this cylindrical landmark kick-started the local skyscraper mania. In 2005, when then Secretary of State, John Prescott, overturned the local authority's planning decision and approved this project, he was warned that it would set a high-rise precedent; it certainly did!

Thankfully, a linear park will offer pedestrians an alternative to walking alongside busy Nine Elms Lane. Initial parts of the park are seen at the US Embassy, the next stop on our route. The previous embassy, on Grosvenor Square, had been sold off as it was quite impossible to upgrade the security features to meet the US government's stringent requirements. Given the value of that central London site, the sale of the land (for a hotel development) allowed the design and construction of the new embassy without additional public funding being required. President Trump saw this as a "bad deal" and the new site as a "lousy location". He famously refused to attend the opening in 2018. Looking at the new building by architects Kieran Timberlake, which is strikingly modern and designed prior to the Trump administration, I was curious to imagine how it might have been designed under Trump - classical columns and athletic Roman statuary, perhaps?

The new embassy is designed as a freestanding glass cube surrounded by soft landscaping. What could have been interpreted as banal is enlivened by sculptural screens of ETFE, a type of plastic. These shield the south, west and east elevations from solar gain. They also imbue the building with its distinctive appearance.

The landscaping of the embassy is an unexpected surprise. Public access is allowed to most of it and the expected security measures are ingeniously concealed; barriers are low stone walls with benches and the omnipresent bollards are concealed within hedges. Fortress America this is not. Landscape consultant, OLIN, selected planting that represents the special relationship between US and UK. The species, in a soft and pastoral setting, were those taken by early explorers from Britain to the New World.

Yet it is quite difficult to concentrate on the embassy when a new icon of show-stopping architecture is grabbing our attention across the park. The swimming pool at Embassy Gardens seems to balance precariously between two residential blocks and hovers some ten floors above our heads. Architects HAL designed the development and the pool, which spans 15m. Apparently, clear acrylic was selected rather than glass because at the required thickness of 356mm, acrylic provides much greater transparency than glass.

From here, it is a short stroll to Riverlight, the next stop on our walk. Designed by Rogers Stirk Harbour + Partners, this impressive collection of six residential blocks takes full advantage of its prominent, riverside setting. Each block is orientated east-west, giving every apartment some sunlight and opening up the gardens in between to sun from the south. As ever with the work of Richard Rogers, the layout is well resolved and the form thoroughly articulated in concrete, steel and glass. Pops of bright colour alleviate the greyness. I enviously imagined living in one of the river-facing apartments with its generous, prow-shaped terrace.

Between Riverlight and Battersea Power Station, some sites awaiting future development lie vacant but it is nonetheless a pleasure to walk there, watching the massive power station looming ahead.

The first stage of Battersea Power Station was completed in 1935, with full completion in the 1950s. It ceased operating in 1983 and, since then, posed to be a headache for London. As a much-loved landmark and a Grade II* listed building, it needed to be preserved but what could be done with a behemoth, its turbine hall large enough to hold St Paul's Cathedral? With new Malaysian owners, the site finally had a master plan by Rafael Vinoly Architects in 2010. Currently, work is nearing completion on the transformation of the building. Clearly too deep to be a residential building, the residential component is limited to the two flanking wings on the east and west, to designs by architects Wilkinson Eyre and interiors by Michaelis Boyd. The rest of the building will contain retail, leisure and office space. Apple plan to move their UK headquarters there soon.

Curiously, one of the famous chimneys will contain a circular glass elevator that pops up for panoramic views - very Willy Wonka!

Seeing Architecture's walk ended with a look at two new residential developments nearing completion and facing each other across the aptly named Electric Boulevard. Prospect Place will consist of five blocks by Gehry Partners, whilst Battersea Roof Gardens is a sinuously curving superblock by Foster + Partners. We were fortunate enough to have Foster's architect, Andy Harris, join us on the walk to discuss both projects. He provided fascinating insight.

Prospect Place expresses the instantly recognisable signature of Frank Gehry; whereas most apartment blocks are functional and rectangular, these seem to billow in the breeze, with a huge complexity of shapes and sizes. It is certainly mesmerizing and I wondered how challenging it would have been to design livable apartments for that sculptural form. Gehry's designers have explained that they start with the apartment layout designs before manipulating the envelope.

Foster's response to a similar brief could hardly be more different. This linear building would have stretched 500m if it was a straight form. Instead, it snakes its way along the site, its sensual curve offering interesting views to and from the vast windows of its apartments. One day I would love to explore the linear roof park, although I know it's accessible to residents only.

The route we walked makes for a fascinating and enjoyable afternoon. Seeing Architecture offers tours of this and other areas of London.

To book an architectural tour with Seeing Architecture, please visit our website, www.seeingarchitecture.org